My exploration of the Language of London is a work in progress. Here is a fragment thereof, to be followed by others…

When on his Box the nodding Coachman snores,
And dreams of fancy’d Fares; when Tavern Doors
The Chairmen idly croud; then ne’er refuse
To trust thy busie Steps in thinner shoes…

…But when the swinging Signs your Ears offend
With creaking Noise, then rainy Floods impend;
Soon shall the Kennels swell with rapid Streams,
And rush in muddy Torrents to the Thames.
The Bookseller, whose Shop’s an open Square,
Foresees the Tempest, and with early Care
Of Learning strips the Rails; the rowing Crew
To tempt a Fare, cloath all their Tilts in Blue:

Linguists know that language, public or private, is never singular but always pluralistic, in their words a shifting and evolving pattern of dialects, ‘sociolects’ and ‘idiolects’. An enduring myth is that Brits, Londoners among them, are ‘monoglots’ and always have been, imprisoned in the one-dimensional reality of a single language. This may have been true of some of us in recent years, but the Londoner of the past was as likely as not to be bi-, if not multi-lingual. The common inhabitants of Roman Londinium, if they wished to better themselves, would have been fluent in Latin as well as in their own Ancient British dialects. Dark-Age traders plying the Thames from Lundenwic had to negotiate the many varieties of Anglo-saxon spoken in England as well as Viking Norse and the ancestors of Dutch and French. For centuries after the Norman Conquest those working in the courts of law had to be tri-lingual as the proceedings were conducted simultaneously in Latin, French and Old English.

At any time in its history the city has resounded to all sorts of Englishes: the picturesque slangs of costermongers, butchers and pickpockets, the arcane jargon of bankers and lawyers, the polished verbal posturing of salon wits and the literati.

In London there I was bent,
I saw my-selfe, where trouthe shuld be ateynte;
Fast to Westminstar-ward I went
To a man of lawe, to make my complaynt.
I sayd, “For Marys love, that holy seynt,
Have pity on the powre, that would procede.
I would gyve sylvar, but my purs is faynt.”
For lacke of money, I may not spede.

Of course the languages of London are not only varieties of English. From the earliest times other tongues have resonated around its hills and streams: the lost Celtic languages of Iron Age Britain, Caesar’s Latin and his legionaries’ vernaculars from around the Empire, the French of mediaeval court and convent, immigrant dialects from Huguenot French and sailor’s Dutch to Yiddish, yielding to the multinational, polyphonic buzz of the modern metropolis.

“If I hole up for a bit I won’t stand a chance of earning myself no more. You’ll have to sausage me a goose’s.” “Sausage you a goose’s? What the hell are you talking about?” Len had turned round from the window and was staring at Snowey. “Cash me a cheque, dopey.”

It was in London’s Westminster that English finally became a language in its own right, symbolically used for the first time by Edward III in 1362 at the opening of parliament. It was in London above all that the unparalleled marvel of Modern English, with its plunderings of other European tongues and borrowings from across the Empire, first evolved in the time of Jonson, Marlowe and Shakespeare. And now, five hundred years on, a wholly new hybrid, drawing on sources as disparate as Jamaican, Urdu, Arabic and Gaelic is set, some experts claim, to displace the native Cockney and Estuary dialects of London, even eventually transform Standard English itself into something strange and novel.

Statistics from the latest Census show that 78 per cent of the capital’s 7.8 million residents speak English as their main language. But the remaining 22 per cent — equivalent to just over 1.7 million people — have one of more than 300 first languages. Of these nearly 320,000 declare, rather worryingly, that they cannot speak English well or at all. The most striking revelation, however, is the scale of linguistic diversity. Overall there are 53 community or heritage languages in the capital spoken by at least 0.1 per cent of residents. There are also another 54 which include variants of established languages such as Chinese or those, such as Caribbean Creole, Cornish or Gaelic, spoken by a small number of people. The most common other language is Polish, spoken by nearly two per cent of residents, followed by Bengali, Gujarati, French, Urdu and Arabic. The most diverse borough is Hillingdon, where 107 languages defined by the Census are spoken, followed by Newham with 104. Tony Thorne’s own researches reveal that these ‘other’ languages themselves are undergoing weird transformations as they come into contact with one another and with native ‘white’ London usages. 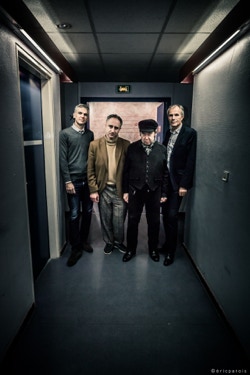 For a change, a musical interlude. My Parisian friends asked me to provide ‘uncompromising’ sleevenotes for their latest collaboration…

A pitiless evocation of De Chirico’s nostalgia of the infinite, a protestation of faith amidst urban modernity’s frozen disorder. The Cool Feedback Quartet’s post-rock psycho-lament is nothing if not a political gesture, an aural affirmation by way of machine-clash, electro-glide and plangent melody, set against the visual markers of crane and vapour-trail, rail and silo…that the future is out of date.

Vindictive vignettes of the dystopia in which we wheel, dive and bump against the plateglass like tanked fish, chatter like caged birds while jets scream…and the pistons and steam-hammers of metropolis clank. In suburban park wastelands lost lovers recoil from superdiversity’s shabby embrace…